The Kit They Carried: Eight Adventurers On The Equipment They Can’t Do Without
HERO’S MISSION War hero to climb Kilimanjaro despite losing both legs in Afghanistan 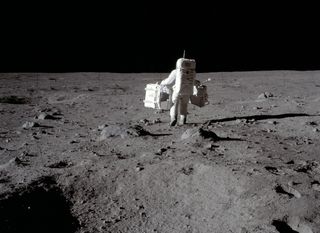 Fifty years ago, on July 20, 1969, humanity stepped foot on another celestial body and into history.
(Image: © NASA)

At an International Astronomical Union meeting in 1955, noted astronomer Gerard Kuiper asked for suggestions and collaborators on a project to make a map of the Moon. At the time, the best lunar atlases had hand-drawn images, and Kuiper wanted to use state-of-the-art telescopes to make a photographic atlas.

Only one person responded.

That was indicative of the astronomical community's general attitude toward the Moon. After all, telescopes were designed to look at distant objects, and the Moon is rather close, and boring as well, since its appearance doesn't change. Furthermore, Kuiper wanted to make a map, and that's the sort of thing that geologists, not astronomers, do.

Kuiper proceeded, though, and by 1960, he had moved his small operation to the University of Arizona in Tucson. There he could take advantage of the region's mountaintops and clear skies, and the university's willingness to move into a field of study that defied traditional departmental boundaries. The next year, President John F. Kennedy announced that a national goal for the decade was to send a man to the Moon and back safely. Suddenly, the niche pursuit of making maps of the Moon had turned into a national priority.

For the next several years, Kuiper's Lunar and Planetary Laboratory produced progressively better images of the Moon, using telescopes built for the purpose. Later they used images from robotic spacecraft to the Moon to produce a series of increasingly sophisticated atlases of the lunar surface.

As a child, I was focused on the accomplishments of the astronauts, starting with the day in 1961 that the principal burst into my kindergarten classroom to tell us that Alan Shepard had been launched into space, and culminating in the Apollo 11 landing in 1969.

Like most of us who watched all those missions, I didn't really expect to go into space science or aerospace engineering. But when I got the chance to study Apollo samples in graduate school, it's not surprising that I gravitated to them. I eventually spent my career studying rocks from space. Similarly, I didn't think much about the groundwork that went into mapping the Moon until I ended up at the Lunar and Planetary Laboratory. Once I started learning the stories and talking to those involved, though, I came to appreciate the number of extraordinary things that were done in that era as a result of the political race to the Moon.

Looking at the Moon from another direction


The Lunar and Planetary Laboratory's first lunar atlases simply consisted of the best images from a telescope. But the group realized they could do better than this. The Moon always keeps the same face toward the Earth. But even on the side facing the Earth, the areas away from the center always appear distorted.

To correct for this, the group made a white globe three feet in diameter, then projected a high-quality telescopic image onto it from down the hallway. By moving around the globe, the surface features then appeared as they would from overhead. Near the edges of the visible portion of the Moon, the shapes of features shifted, with ovals becoming circles and squiggly lines becoming detailed structures. Although the idea had been suggested before, the "Rectified Lunar Atlas" was probably the best use ever made of the technique.

Furthermore, the process yielded scientifically valuable insights. Graduate student William Hartmann, while moving around the globe to take the "rectified" images, noticed that on one edge of the Moon, there was a feature — now known as Mare Orientale — that looked a lot like many of the basins that were well known to telescopic observers. But it had some crucial differences.

For one thing, it had fewer later impact craters within it, suggesting it was younger and better preserved. Furthermore, it had a distinct bull's-eye appearance, with concentric mountain ranges forming the rings. Hartmann realized that this might have been what all those basins had once looked like, before later impact craters and lava flows smeared out detailed features. And the idea of huge impacts ultimately led Hartmann and others to suggest that the Moon formed as a result of a giant impact on Earth, an idea that is still the basis of the leading theories of the origin of the Moon.


But one of the most impressive feats of converting those telescopic images into crucial information for Apollo came from Ewen Whitaker, an unassuming Englishman who had been the only one to respond to Kuiper's solicitation in 1955. Whitaker moved to America to join Kuiper's group and moved to Arizona with him.

When the robotic Surveyor 1 spacecraft became the first American mission to make a soft landing on the Moon in 1966, the mission team analyzed the photographs returned and reported where they thought they had landed. But they were wrong. Whitaker used the best telescopic image and compared what hills should be visible in what direction, and suggested the correct location a few miles away.

After Apollo 11 yielded the first successful human landing on the Moon, NASA wanted to use Apollo 12 to prove that it was possible to precisely target a specific location, based just on latitude and longitude. But you have to know the latitude and longitude of some location with precision.

NASA tasked Whitaker with finding exactly where another unmanned Surveyor mission, Surveyor 3, had landed. Whitaker gave his best estimate, and Apollo 12 aimed for it. The astronauts could not see Surveyor 3 on the way in, because it was in shadow. When they looked around after they landed, they found that they were within walking distance, after a journey of 240,000 miles.

The maps of the Moon that were created at the Lunar and Planetary Laboratory have long since been surpassed, and those best-ever photographs of the lunar surface aren't nearly as good as those of taken by more recent orbiters. But the organization that Kuiper started continues to explore. For more than a decade, spacecraft landing on Mars have utilized images taken from orbit by HiRISE (High-Resolution Imaging Science Experiment), operated out of the Lunar and Planetary Laboratory, to select their landing sites. At the moment, the OSIRIS-REx robotic spacecraft, also directed out of the Lunar and Planetary Laboratory, is maneuvering close to the asteroid Bennu, sometimes within a few hundred meters of the surface, making maps in search of a place to grab a sample to bring back to Earth.

After that sample is returned, no doubt scientists will analyze it for decades in the future, just as we are still analyzing the samples returned by the Apollo missions. It is the touchdowns and the samples that we remember, but it is the maps that come first.