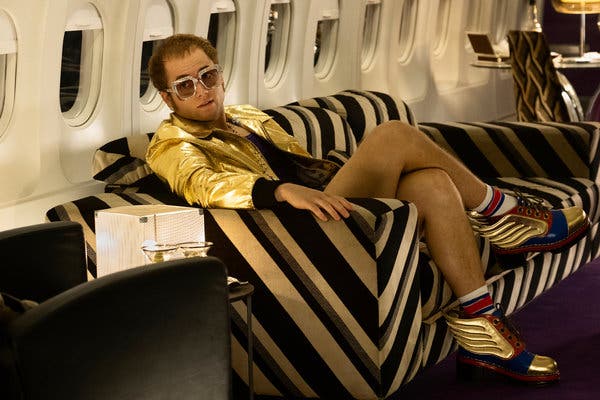 LOS ANGELES — Multiple movie studios passed on the opportunity to make “Rocketman,” an R-rated musical fantasia about Elton John’s hedonistic breakthrough years. Too gay. Too expensive. Too reliant on an unproven star.

But one film company, the down-on-its-luck Paramount Pictures, saw the audacious project as a chance to prove something to both Hollywood and Wall Street — namely that, to borrow a reference from Sir Elton, it’s still standing.

Now comes the moment of truth.

“Rocketman” will arrive in theaters on May 31 as perhaps the most ambitious movie of Hollywood’s summer season, a four-month period that typically accounts for 40 percent of annual ticket sales and relies overwhelmingly on franchises. Starring Taron Egerton and costing an estimated $120 million to make and market worldwide, “Rocketman” trails glitter — a million Swarovski crystals adorn the costumes and eyewear — and depicts gay sex, a first for a major studio. Mr. Egerton, 29, known for the “Kingsman” action comedies, did all of his own singing, reinterpreting classics like “The Bitch Is Back.” There is intricate choreography (one stylized scene finds an entire London neighborhood dancing in formation) and an orgy musical number set to “Bennie and the Jets.”

Depending on its box office performance, “Rocketman” could have wide ripple effects. Paramount has delivered nine consecutive quarters of improved financial results for Viacom, its corporate owner, but a turnaround is still tenuous. A big hit — and one that’s not a sequel, spinoff or reboot, at that — would provide a morale boost and send an important message to Hollywood’s creative community and Viacom investors: that even in the age of Netflix and Marvel, Paramount can deliver.

The stakes are also high for Mr. Egerton. His previous movie, Lionsgate’s big-budget “Robin Hood,” was a critical and commercial bomb. If this one fizzles, Mr. Egerton’s leading man opportunities may vanish. Dexter Fletcher, who directed “Rocketman,” is also hoping for a career-making moment. Mr. Fletcher, who also acts, has never had a breakout success as a filmmaker, although he earned points in Hollywood for finishing “Bohemian Rhapsody” after the credited director, Bryan Singer, was fired.

In some ways, almost every major studio has something riding on “Rocketman.” Movies built around song catalogs have become white hot in Hollywood. Baz Luhrmann is working on an Elvis Presley movie for Warner Bros. Sony recently bought the rights to “Once Upon a One More Time,” described as a fairy tale fueled by Britney Spears songs. Universal is developing a Madonna biopic called “Blond Ambition.” Celine Dion, David Bowie and Judy Garland films are on the way from smaller studios.

Turnout for “Rocketman” could either heat up or cool down studio interest. Right now, film executives are dreaming of finding another “Bohemian Rhapsody.” The Queen bio-musical collected a jaw-dropping $908 million worldwide last year and won four Academy Awards, including one for Rami Malek as Freddie Mercury.

“It will be interesting to see how broad the ‘Rocketman’ audience will be — whether it bridges the gaps,” said Paul Dergarabedian, senior media analyst at Comscore, which tracks box office data.

Heterosexual men are typically the hardest audience for musicals to reach. “Bohemian Rhapsody” overcame that hurdle, but no one is exactly sure why. Some longtime movie marketers point out that Queen anthems like “We Will Rock You” and “We Are the Champions” are sporting event mainstays. “Or it could be that these movies are hitting on multiple levels: biopic, jukebox musical, an anchor performance, a little documentary even,” Mr. Dergarabedian said.

There are signs that Paramount’s gamble on “Rocketman” will pay off. The movie had its world premiere on Thursday at the Cannes Film Festival, where attendees openly boo if they don’t like what they see. “Rocketman” received a prolonged standing ovation and positive reviews. “A full-blown song-and-dance spectacular, in which fantasy and reality often blur together — sometimes with seamless fluidity, and sometimes with quasi-Brechtian distance,” wrote Justin Chang, a critic for The Los Angeles Times. 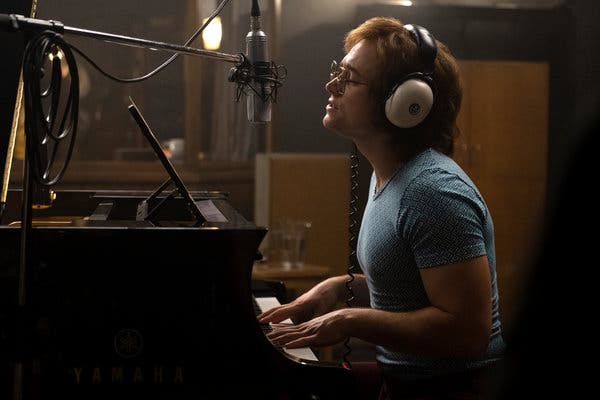 The film arrives in theaters on May 31 as perhaps the most ambitious movie of Hollywood’s summer season, a four-month period that typically accounts for 40 percent of annual ticket sales.CreditDavid Appleby/Paramount Pictures, via Associated Press

Paramount certainly seemed pleased. Publicists for the studio, which has placed last at the domestic box office for the last seven years, even as it found occasional hits like “A Quiet Place,” sent out a news release that said in capital red letters, “We’ve been waiting a long, long time — ‘Rocketman’ blasts off in Cannes!”

Doug Creutz, an analyst at Cowen and Company, expects “Rocketman” to collect roughly $120 million in the United States and Canada and rank as one of the 12 biggest movies of the summer. Sequels and reboots will fill every other slot, Mr. Creutz predicted in a recent report, with one exception. He also has high hopes for “Once Upon a Time in Hollywood” (Sony), a lavish 1969-set drama from Quentin Tarantino and starring Leonardo DiCaprio, Brad Pitt and Margot Robbie.

“Buzz for the film seems pretty solid,” Mr. Creutz said of “Rocketman,” which he described as “a counterprogramming alternative to younger audience-targeted fare.” Also arriving on May 31 is “Godzilla: King of the Monsters” (Warner/Legendary) and “Ma,” a Universal-Blumhouse horror movie.

Still, success for “Rocketman” is far from guaranteed.

One of Paramount’s biggest challenges involves the perception of success. If “Rocketman” sells even half the number of tickets as “Bohemian Rhapsody” it will be a runaway success. But try telling that to box office headline writers.

Catch up and prep for the week ahead with this newsletter of the most important business insights, delivered Sundays.

There is no way for Paramount to avoid comparisons to “Bohemian Rhapsody,” even though “Rocketman” is a sharper-edged film that has a more auteur sensibility. Mr. Fletcher’s film begins and ends with Mr. John in rehab, where he identifies himself as an alcoholic, with addictions to cocaine and sex.

Gay imagery was largely underplayed in “Bohemian Rhapsody,” to the dismay of people eager for Hollywood to become less timid about homosexuality. But the depiction of same-sex relationships in “Rocketman” could limit interest in more conservative parts of the United States. The contemporary romantic comedy “Love, Simon” was a hard sell last year because it ventured a kiss between teenage boys. “Rocketman” is expected to generate enormous ticket sales in countries like England, but the film will not make it past Chinese censors without severe sanitization, something that Mr. John is likely to deem a nonstarter.

“Even if the movie doesn’t make one penny at the box office — which will kill Jim Gianopulos — it is the movie I wanted to make,” Mr. John said from the stage after the Cannes premiere, referring to Paramount’s chairman.

To overcome any box office difficulties, Paramount has thrown all of its weight into marketing the film. Fans can upload photos of themselves to a Paramount website and find out what they would look like in flamboyant Elton John eyewear. (Tagline: “Show the world you were never ordinary.”)

To generate word of mouth, Paramount teamed up with Fandango to offer sneak-peek screenings at 400 theaters on Saturday.

Mr. Gianopulos even likened “Rocketman” to a superhero movie as part of a push for the movie at the most recent CinemaCon, a convention for theater owners. “If musicians were superheroes, Elton John would be Rocketman — capable of escaping the gravity of the ordinary, fear and prejudice,” Mr. Gianopulos said on stage at Caesars Palace in Las Vegas, where Mr. John performed 450 shows for 1.8 million fans from 2004 to 2018.