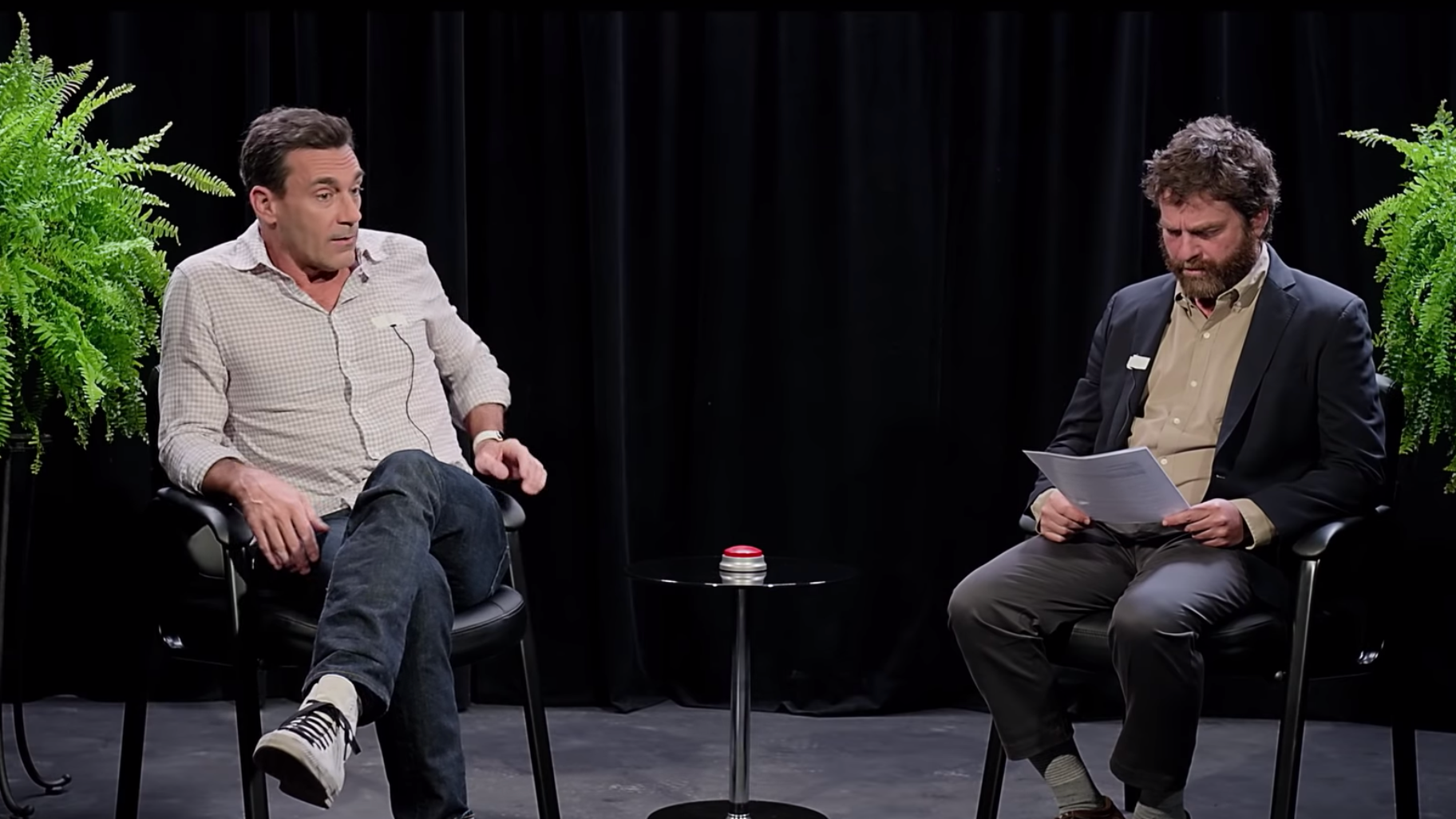 The Netflix feature doesn't try to get too fancy with adapting the cult web series.

For fans of Zach Galifianakis's celebrity interview web series Between Two Ferns, it seemed obvious a movie adaptation shouldn't work in any regard. The formula that made the original run such a palpable hit—its madcap editing style and brevity (knowing when to get out of dodge)—simply can't be blown up to an hour and a half. So when Netflix announced Between Two Ferns: The Movie, the reaction was understandably: polite consternation.

Just about everyone is a fan of the Funny Or Die sketches, too, in which Galifianakis uses his tandem attributes of deadpan charm and fearlessness to insult A-list actors to their faces. Even though we all know it's in good fun, there's always something refreshing about seeing game celebrities agreeing to face their most frequent genuine criticisms, relayed by the overnight star of The Hangover. Some handle it better than others (self-aware comedy kings Jon Hamm and Keanu Reeves show up in the film, obviously, no strangers to allowing fun to be poked whenever possible). That lays the groundwork for the movie, which includes plenty of the tried-and-true Between Two Ferns format, but wrapping it up within a mockumentary road trip comedy.

The plot, as if such a thing really matters, is that Galifianakis has grown tired of alienating himself and his peers on public access television (in the movie's world, Funny Or Die founder Will Ferrell discovered the TV show and uploaded episodes without permission) and asks Ferrell for a "fancy network talk show" of his own. Ferrell agrees, as long as Galifianakis can deliver ten episodes of Between Two Ferns to the FoD headquarters in L.A. in two week's time. The studio where the show's normally shot has been destroyed after a burst pipe led to its flooding—and Matthew McConaughey having a near-death experience—so Ferns goes on the road.

Expanding the universe of the show to include those behind the camera doesn't always go well (see: The Office's final season, in which Jim and Pam's marriage is weakly tested for like the hundredth time by a hunky camera guy) but the talent Between Two Ferns recruits are, thankfully, across-the-board welcome additions. Lauren Lapkus as Galifianakis's producer and assistant ("I call her 'the getter,'" Galifiankis tells the camera early on, "She just gets it. She gets me, and then sometimes she actually... gets me things.") is a shot of positivity in what could have been an off-putting, cynical, inside-baseball kind of movie. Indie comedy standout Rekha Shankar also gets a great platform as the director of the student film following the Between Two Ferns road trip.

Written and directed by Comedy Bang Bang's Scott Aukerman, the film is naturally irreverent as all hell. Don't look for true character arcs or a serious third-act turn, but the incessantly flip comedian leaves room for a warm beat or two among the many, many "bits" that fill the script during and between its hosts interviews.

Yes, this is a movie but it's also still Between Two Ferns, which means a delightfully pathological reliance on insulting artists at the top of their craft is still mission number one. Chrissy Teigen and John Legend get their own mini-story within the story, and there are some all-timer jokes in BTF segments with the likes of Awkwafina, Benedict Cumberbatch, Brie Larson, and Hailee Steinfeld. A lot of the fun of this movie is, obviously, gaping at the A-listers who agreed to this, so I'll leave the rest as a nice surprise.

While this didn't have to be a movie (I'm sure many of us would have enthusiastically settled for much more of the interview content just lazily strung together), Between Two Ferns is a light, unambitious triumph of a movie adaptation. Sometimes you don't need a high-minded reason to make or watch a thing other than the knowledge that it'll be really fun.