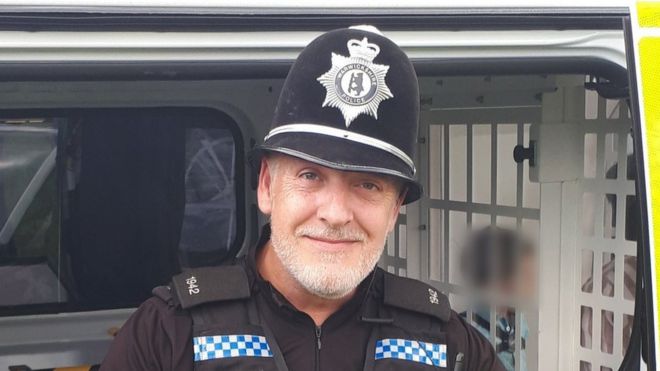 A police constable has shared his journey from being a teenager who slept rough to becoming a neighbourhood officer.

The Warwickshire officer, 46, said he suffered abuse from an alcoholic mother, was locked in a coal shed and eventually slept rough.

He said his story showed "hope" and "determination" can surpass all else.

The police officer, now married and a stepfather, said he had experienced some "low lows" while growing up in Nuneaton.

PC Croshaw regularly suffered violence as a young boy, recalling being beaten with a bat, locked in the coal shed naked and verbally abused.

He scraped through school, he said, but dropped out of college, sleeping rough on and off after being "thrown out" following arguments with his mother.

Eventually, he said, some officers found him sleeping in a rugby club and took him to Nuneaton town hall where he was officially declared homeless.

He then lived in a bedsit - where he said he witnessed heroin use and "nasty violence - but worked hard in a selection of part-time jobs.

"I was working seven days a week at one point, which was better than being in a horrible bedsit," he said.

Beaten as a child; homeless as a teen; brother abused; parents alcoholics & mental health probs...
Bùt I rose above. pic.twitter.com/2NEmRkPYSs

Later, he decided he wanted to make a change from the hospitality trade he was working in to a job he found more rewarding.

Remembering some helpful interactions with police when younger he decided to train as a Police Community Support Officer (PCSO).

"The role was sold to me in the sense that I could be the eyes and ears on the streets, conducting foot patrols, and meeting the local community," he said.

After four years of service, including receiving a force commendation for helping detain a sex offender, he became a police officer.

"I joined the police because I have seen low points in my life," he said.

"The police have been involved in my life at various stages and during each of those stages they were there to help.

"I felt that I would not mind putting myself at risk, if the reward would be protecting someone else, or even preventing any risk to others."