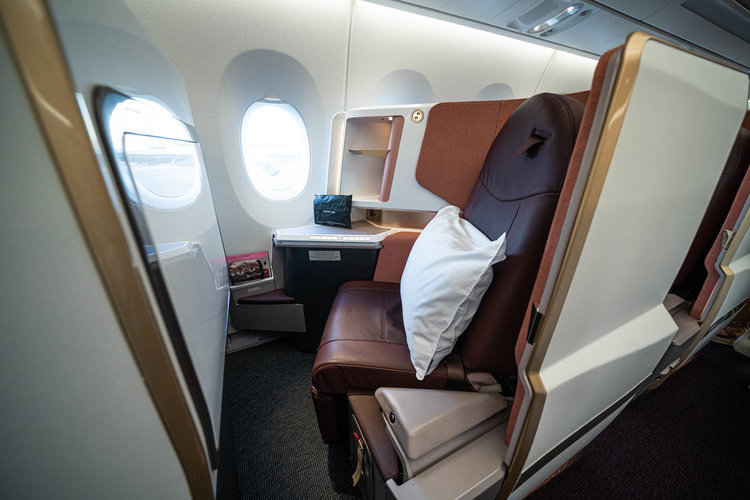 Virgin Atlantic is a masterpiece in branding.

Richard Branson's plucky airline, the centerpiece of his aviation and Virgin portfolio, is thought of outside the UK as a major player, a global behemoth bringing travelers all around the world via London and in style.

In reality, the 35-year-old airline is a rather minor player, with just 33 routes — all long-haul — and 47 aircraft according to airfleets.net. For comparison, British Airways has just shy of 280 aircraft, while Delta has 908 mainline jets.

But despite its small size, the airline has been strategic and nimble. It's 49% owned by Delta and is in a joint venture across the Atlantic with Delta and Air France-KLM, offering it an outsized footprint.

In its relatively young life, Virgin Atlantic become an icon of style, quirk, and luxury, from its luxurious business class lounges to its on-board bar, and its game-changing on-board style that's set a new standard for long-haul luxury.

Virgin's business class — it brands it as "Upper Class" — has been a top product for years, but the seats were beginning to show their age and starting to lag behind some competitors' offerings. The cabin's configuration was great for sleeping, but it was pretty much impossible to look out the window, and there was virtually no storage room near the seats.

Similarly, the premium economy — now called "Premium" — and economy cabins were due for a refreshed look.

Virgin recently took delivery of two brand new Airbus A350 airplanes, which made for a perfect opportunity to revamp its onboard offering.

Business Insider had a chance to tour one of the two planes, and we were impressed by the stylish ride that's already bring passengers to and from London.

Take a look below for more on the cutting-edge new plane:

On the way to see the plane, we stopped in Virgin Atlantic's JFK Clubhouse lounge...

... Where we saw the new A350-themed "Mile High Tea" that the airline is offering on-board.

Can you tell the airline is excited about the cutting-edge jet?

The jet is powered by two Rolls-Royce Trent XWB engines, which builds upon the Trent 1000 used on some Boeing 787 Dreamliners. They're massive, more than 10 feet in diameter.

As soon as you step on board, you'll come across one of the biggest changes — Virgin did away with its famous bar ...

... and replaced it with a new lounge area called "The Loft."

The Loft, which sits between the Upper and Premium cabins, is only available for Upper Class passengers to use, though.

Those lucky passengers can turn left past The Loft, where they'll find Virgin's brand new Upper Class "suite." Although Virgin's purple mood lighting is a big part of the aesthetic, the regular lights were left on during our tour to help with photography.

The suites are arranged in a 1-2-1 layout, meaning that every passenger has direct and immediate aisle access — handy, if the person next to you is sleeping but you want to get out to the lavatory or The Loft.

Seats in the middle row face toward the aisle, offering a better sense of privacy if you're seated next to someone you don't know. Seats on the sides, however, face toward the windows.

The seats sit in mostly enclosed pods, each with a small side table, shelving, and lighting.

And a large folding tray-table. The placement was fairly unique, but the position can be adjusted so you can squeeze out if you need to use the bathroom during dinner.

As should go without saying for a new business class product in 2019, the seats can lie fully flat to turn into a bed.

And it's a comfortable bed. Virgin provides passengers with bedding, including a unique fitted padded sheet.

The pillow and amenity kits — stocked with essentials like a toothbrush, sleep mask, and ear plugs — are waiting on the seats when passengers board. The fitted sheet can be handed out before takeoff, so you can be ready to go right to sleep once you're in the air, or on request.

When you fold the seat down, the small ottoman at the front end of the suite joins the seat to make the bed.

You can also lower the chair into a lounging position and put your feet up on the ottoman.

One of the biggest complaints about Virgin's old Upper Class seats was a lack of storage space. On the A350, though, this isn't a problem.

Each suite also has a small reading lamp, in addition to the overhead light.

The seat controls are along a small side table.

The in-flight entertainment screens are stowed for takeoff and landing, but pop out and can be adjusted to your preferred angle

By now, you might be wondering why I keep referring to the seats as "suites." Unlike Delta, Qatar, and myriad other airlines offering fully enclosed business class suites, Virgin's suites are a bit different.

Instead of a door, they have a privacy barrier that extends about 10 inches.

Virgin has said that the partial closure fits better with the "social" atmosphere the airline is trying to promote, and that it gives flyers enough privacy.

It actually seemed rather effective.

Definitely better than the lack of privacy in your standard reverse herringbone business class cabin.

Plus, when positioned in bed mode, and your head is further back, it feels even more private.

Here's the view from a middle seat with the divider open ...

... And here's what it looks like when it's closed.

Virgin also refreshed premium economy for the A350.

The Premium cabin is in a 2-4-2 configuration. Each seat is 18.5 inches wide with seven inches of recline and 38 inches of pitch

Seats in the bulkhead row have the most legroom, and offer comfortable leg rests.

Seats in the other rows have pedal-style footrests instead.

Each seat also has a universal power outlet.

Headrests are fully adjustable, perfect for a red-eye flight.

the economy product is also solid, with 235 seats in a 3-3-3 layout. Each is 17.4 inches wide with five inches of recline. Pitch varies depending on what row you're in, averaging around 31 inches in regular seats, and 34 inches in "Economy Delight" extra legroom seats.

These seats felt a bit narrow, but they were generally comfortable, and the cabin felt sleek.

Each seat has an 11-inch in-flight-entertainment screen, equipped with a USB port for charging your phone or other handheld device.

All in all, though, it's the Upper Class seat that truly shines.

... Down to the windows in the business class lavatories.

Overall, Virgin Atlantic's A350 is an impressive plane.

One which looks likely to carry the airline through its next chapter.