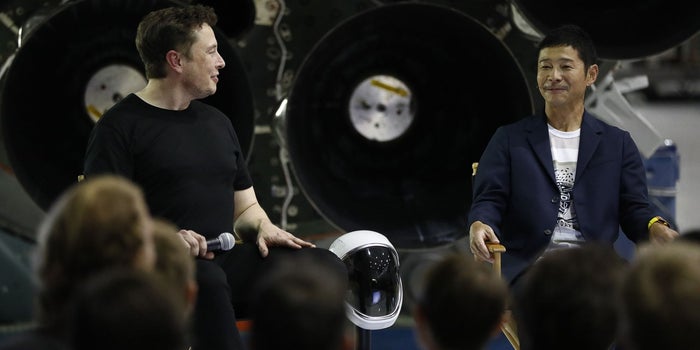 While SpaceX’s ultimate goal is to get people to Mars, Elon Musk's company will start with a trip that a few men have famously gone on before: to the Moon.

Musk announced Monday that Japanese billionaire Yusaku Maezawa will be the company’s first space tourist, signing up for a trip that hasn’t been made since NASA’s Apollo program ended in 1972. SpaceX’s plan is to take Maezawa around the Moon in 2023.

The 42-year-old Maezawa is an entrepreneur, but his first love is music. He plays guitar and drums and started his first band in 1993 when he was in high school. In lieu of going to college, he decided to visit the U.S. with his girlfriend. There, he began amassing a collection of rare CDs and records that in 1995, when he returned to Japan, was the foundation for his first business, a mail-order music venture.

In 1998 when he was 22, he officially incorporated the business, which he named Start Today, after an album of one his favorite bands, Gorilla Biscuits. Two years later, the company launched online. While all this was going on, his band Switch Style got a record deal, made three albums and went on tour. After three years of doing both, at 25, he decided to run the business full time.

In 2004, Start Today expanded into selling clothes, and launched Zozotown, a popular retail platform akin to Amazon that offers more than 6,800 brands and in 2017 brought in $76 billion in sales.

Maezawa still collects, though he has moved beyond CDs. He’s now more focused on famous works of art, like the 1982 Jean-Michel Basquiat painting he purchased last year for $110.5 million and promptly sent on a museum tour of the U.S. It was a record-breaking sum for Basquiat’s work, a record that had also been previously set by Maezawa when he bought another painting by the late artist for $57.3 million in 2016.

The billionaire CEO is also a big fan of giving back to his hometown. Start Today is headquartered in Chiba Prefecture, and Maezawa plans to build a museum there where he can put his art collection on display.

Maezawa, who is the 18th richest man in Japan with a net worth of $2.9 billion, bought out all the seats on SpaceX’s Big Falcon Rocket for the trip and isn’t planning on going alone. As befitting his love of art, he wants to bring a group of artists to make the week-long voyage into what he describes as an “awe-inspiring, global, universal art project” called #dearMoon. He wrote of the goal, “I hope that this project will inspire the dreamer within each of us.”

I choose to go to the moon, with Artists. #dearMoon https://t.co/ivMypEcWBZ